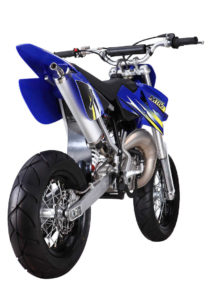 KIWI AS: The Savice MT80 certainly looks the part and it was designed here in New Zealand.

When the first mass-produced motorcycle to be developed by a New Zealand company rolls off the assembly line in China, the engineer behind the venture, Denver Lawson, will establish a new national milestone for a country that has produced pioneering motorcycle engineers the calibre of John Britten, George Johns, and Bert Bannister.

The latter two were the brains behind the Maori motorcycle of 1916, that featured the world’s first CVT, constantly-variable transmission, (now widely adopted by motor scooters and many car manufacturers). Almost a century later, Lawson’s first bike is no less innovative. It features his patented new technology for a two-stroke engine, and the Auckland engineer is only just getting started in his quest to make two-strokes more fuel- efficient and less environmentally damaging.

What the world wants is efficiency, says Lawson, and whether it’s efficiency or performance you want, the fact that a four-stroke wastes two strokes is a big issue.

The world is going to demand those wasted strokes back.

Lawson’s company, Savice, has already displayed prototypes of the entry-level MT80 motocross bike it intends to make, at motorcycle shows in Milan and Indianapolis, and has found distributors in Japan, Australia, Italy, Canada, the US, and Indonesia. The bike is undergoing its final chassis testing as you read this before production begins at Savice’s manufacturing facility in Chongqing, China.

The MT80 is a first-step product for Savice and will be sold under the company’s registered brand, Mira. Although a serious product looking at filling a gap in the youth, off-road competition market, it also represents a test case for the manufacturing operation at Chongqing, and the relationship that Savice has established with the existing motorcycle component manufacturers based there.

The manufacturing and marketing of the MT80 is therefore phase one of a two-stage business plan. Once the assembly line in Chongqing is humming along smoothly and efficiently, phase two involves the re- establishment of Savices R&D division in this country, where it will focus primarily on developing clean-burning, direct-injection, two-stroke engines that will be quite unlike any strokers the world has seen before.

“We identified Chongqing as the best place for Savice, since the majority of the motorcycle industry suppliers are located in this area,” says Lawson, however, prototyping and jobbing machining are much easier to perform in New Zealand. Also, prototype designs are much more secure here.

“We feel that this is a sustainable model for the future.”

Although the MT80 looks like any other 80cc motocrosser with its jazzy graphics, bright colours, and jumped-up suspension, it does showcase the first new two-stroke engine technology developed by Savice. At the international bike show in Milan, the innovative cylinder design of the engine attracted the interest of Gilardoni, an Italian company that makes more than a million two-stroke cylinders annually.

“The company president gazed at it and the cylinder head for about 20 minutes, and chatted to us for another 20 after that. We feel once we achieve production of the MT80, further sales opportunities will emerge not only for the motorcycle, but for OEM supply of the engine.”

The use of an exhaust power valve is commonplace in the two- stroke MX sector. However, rather than utilise it to boost mid-range performance in a highly-tuned engine, Lawson’s first mass-produced engine uses it to boost low-end performance. The easy access to torque enables the MT80 to have a four-speed gearbox, resulting in a significant weight reduction and increased ease-of- use.

“MX forums on the web are full of dads asking questions about how to tune their kids Japanese 85cc motocross bike to make it more rideable. We identified there was a gap in the market between cheap, low-tech Chinese dirt bikes and the highly-tuned, high- maintenance designs of the Japanese.”

Business is just like racing, says the former builder of Ferrari and De Tomaso Le Mans race cars in the UK during the 1980s. The next engine Savice will launch after the MT80 will be a direct- injection, 250cc, two-stroke single with a six-speed gearbox. Unlike the 80 it will have full Euro 4 emission compliance, with the powertrain and its delivery suitable for road and dirt. Meanwhile, work has begun on larger engines, kicked off by a 500cc single that is likely to be Siamese-d into a 1000cc twin. The two-stroke will really enter a new age when those direct-injection engines start rolling down the assembly line, especially as the half-litre single has already shown its potential to be pumping out something near 100bhp.

We Kiwis have always been good at getting more power from engines, but gains in efficiency are another story.

Getting more power is easy compared to getting it along with reasonable emissions, and the future of the two-stroke hinges on less emissions.