Denver Lawson – the Kiwi who is Cleaning Up the Two-Stroke – stuff.co.nz

Over the years two-stroke motorcycles have attracted such terms as stinkwheels and ring-dings – derogatory references to either their talent for pumping out unburnt hydrocarbons or their unappealing sound effects.

However, an Auckland-based engineer, Denver Lawson, remains absolutely convinced that two-stroke engines can be designed to emit less header pipe emissions than equivalent four-stroke powerplants so that full advantage can be taken of their lighter mass, higher efficiency, and denser power production.

Lawson first became interested in cleaning up the two-stroke when he was engaged as a consultant for refining the Buckley 500cc Grand Prix racing motorcycle cylinder in 1999. The racer was commissioned by computer chip entrepreneur Bill Buckley to showcase New Zealand’s ability to develop high technology. 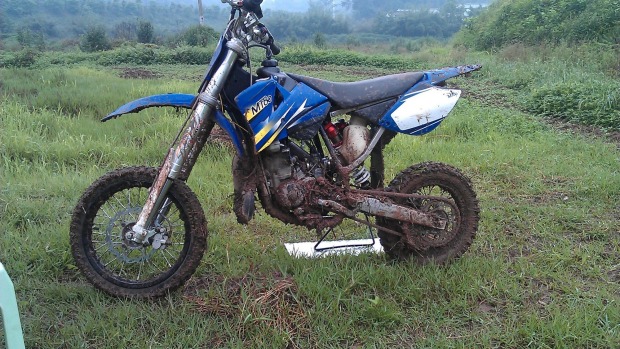 The bike might not have been a great success, (although it did manage to finish 16th in the 1999 South African GP and won the national Formula One title in 2001) but it did spur Lawson on towards finding solutions to long-standing two-stroke problems, notably their high use of fuel and associated unacceptable emissions. During that journey, he developed and patented the self-sealing piston ring, formed a long association with the JiaLing motorcycle company in Chongqing, China, and almost kick-started his own motorcycle brand, Mira.

When I last spoke with Lawson back in 2011, Mira was just about to launch its first motorcycle. The MT80 was designed to be an easier-to-ride alternative to Japanese mini-motocross bikes, which often have peaky power deliveries that can catch young riders unawares. A full range of other motorcycles were planned, including a 1000cc two-stroke twin that could pump out close to 200bhp and produce a torque curve that looked positively voluptuous in profile. Unfortunately, the MT80 was nipped in the bud when a major shareholder pulled out on the eve of the launch of the bike.

Despite the setback, Lawson remained convinced that two-strokes were the way of the future, and recently performed a detailed computer analysis for Martin Aircraft that showed that a properly-designed two-stroke could result in power production that was 19 per cent denser than that of an equivalent supercharged four-stroke, while producing far less emissions than the rotary engines currently favoured for aero use.

“We started out just trying to prevent the two-stroke from smoking, and we can now make them amongst the lowest emitters of any type of combustion engine. We can equal any four-stroke on header pipe emissions and produce far less emissions than a rotary.

“With a two-stroke you can contour the combustion chambers perfectly for improved combustion. I’m reluctant to go into further details, but we use a modified form of toroidal chamber.”

Lawson says that these chambers when combined with a refined direct-injection fuel system and separate oil injection can effectively sanitise a two-stroke engine. His latest company, Integrated Forced Fuel Injection (IFFI), has been formed to complete the process of applying for patents for the fuel injection system and the accompanying piston design that have been developed.

Lawson has done a lot of work sorting out the engine designs of others, and is keen to work on his own, putting his ideas on the use of polymers and ultra-high-strength, aircraft-quality steels into practice.

So where will we see these engines used? Lawson has shifted his focus away from the motorcycle world to the aero and marine sectors.

“There are no emission regulations for microlight engines yet, but they’ll come and that’s where we see the application.”

Meanwhile, a 2.2 litre V6 two-stroke engine is currently under consideration for a development grant from an overseas government. It features a wide V-angle to enable it to be more effectively packaged as an inboard marine engine, mounted beneath the floor of the boat.

“As with the MT80, we look at the business case before we begin development and we’re confident that we’ve spotted a hole in the marine market.

“No-one makes a good two-stroke inboard, and this one is a space-saver. All inboards are auto engines that have been modified for marine use, so they use vertical formats and the result is that there’s this big lump of wasted space in middle of the boat.

“It’ll develop 220-250bhp and only weigh 87kg, including the ECU and intake and exhaust systems.”

If the grant application is successful, JiaLing will assemble the engine after installing a dedicated TS16949-approved production line for it. This will allow full traceability throughout the supply line.

So 2017 should be a busy year for Lawson if the V6 project comes to fruition. In the interim, he’s looking for a six-month to one-year project to see him and his four-person team at Iffitech through the rest of 2016. So if you require the services of arguably our most talented and innovative internal combustion engineer, with a proven record for trouble-shooting and problem-solving, you can contact Lawson at den@iffitech.com.